The new Honda Africa Twin is the most anticipated and discussed bike of 2016. Carl Kritzinger attended the international launch in the Western Cape and filed this report.

In 1986, the year of its birth, the Honda NXR750 “Africa Twin” won the Paris-Dakar rally raid. It was conceived with the sole purpose of winning this and other extreme overland races that were growing in popularity in the 80s. Almost overnight it became the benchmark for reliability and performance and dominated the series for the following four years.

Using the knowledge gained in developing and racing the NXR750, Honda designed a production motorcycle capable of long-distance touring over varying and often unforgiving terrain. Thus, in 1988, the Africa Twin XRV650 RD03 was launched. 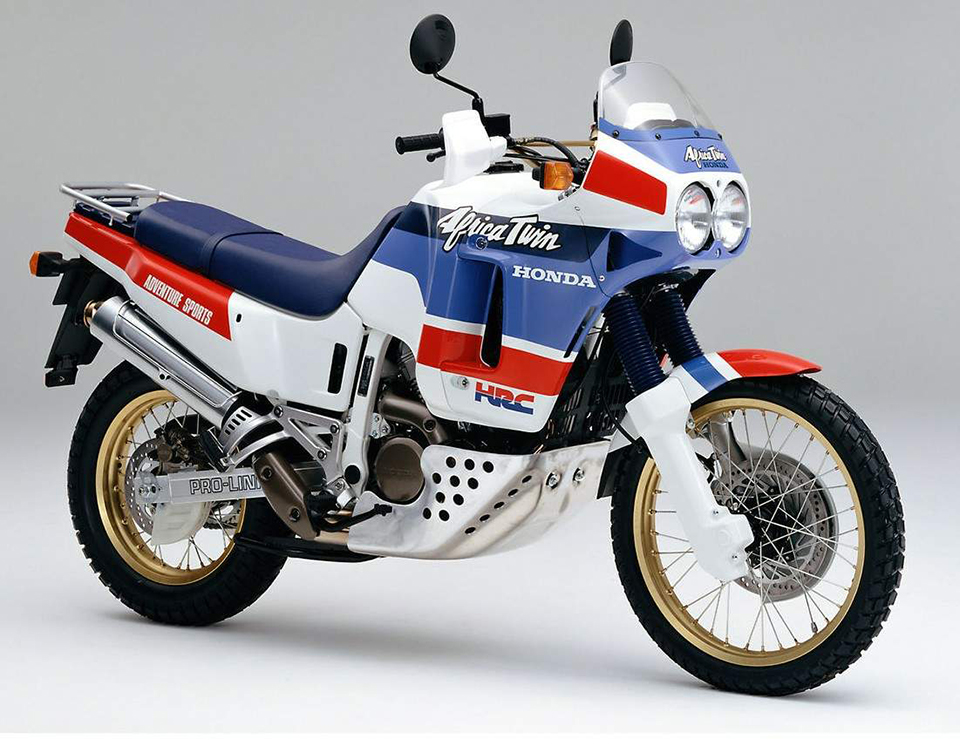 A Twin overshadowed by a Blade

This “consumer” Africa Twin was popular, but it did not receive all the praise it deserved. That’s because the late 80s and 90s was the era of the superbike. So, Honda ended production of its last Africa Twin, the XRV750 RD07A, in 2003. Little did they know that it would take the Twin just a few years to become a collector’s item, as the adventure scene exploded. 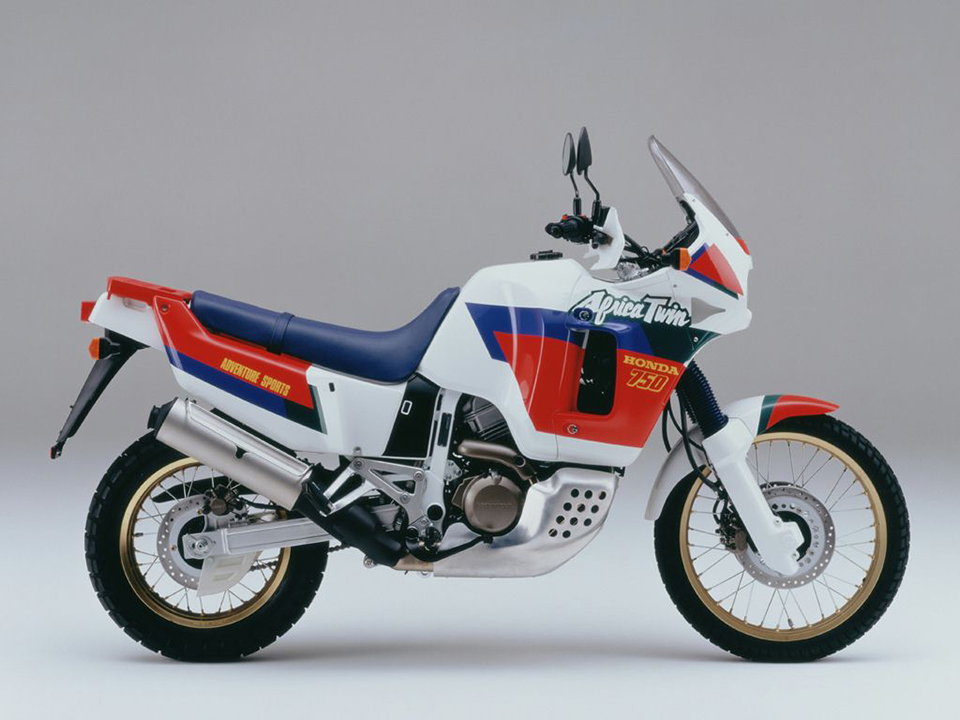 If adventure bikes have become unaffordable, bloated and – dare we say it – soft, the new Honda seems to choose a different path. It appears lean and aggressive, but not intimidating. A dry mass of 208 kg (dry, for the entry-level version) might sound heavy, but as soon as you get going, it feels as light as a 600 cc. This is the result of the Twin’s near perfect weigh distribution and balance.

Press the starter and the parallel twin, and not a V-twin as before, gives an impressive bark. Because of its 270-degree crankshaft the engine sounds and feels like a single-cylinder unit. This makes it the ideal power source for off-road riding as it provides good traction and enough torque at low revs. This all-new, compact 1 000 cc engine puts 70 kW and 98 Nm at your disposal, with a power curve that doesn’t intimidate. But there’s more than enough grunt to allow the Twin to fulfill its (dual) purpose.

With a 21-inch front and 18-inch rear wheel (with spokes and inner tubes) Honda’s intention is clear: the Africa Twin should be in its element on all types of gravel roads.

I did wonder how these fairly large wheels would perform on tar, since many so-called adventure bikes sport smaller, fatter front wheels, for optimal road holding on tar. To my surprise the Honda handled very well and thanks to its well-designed suspension we could even have fun on the twisty tarred mountain passes. Honda says the carcass and compound of the 90/90-21 and 150/70-18 Dunlop tyres were developed specifically for stickiness on tar and gravel.

The Twin’s comfortable seat easily adjusts for height, making it accessible to those who normally wouldn’t consider a bike of this kind. The standard screen provides sufficient wind deflection, emphasising that this motorcycle isn’t just meant for weekenders, but also for those who will cross continents. Good on tar, great on gravel

The Africa Twin is a versatile machine, but it yearns for the moment its rider spontaneously pulls the reins left or right and sets on a gravel road with an unknown destination or outcome. That is what this bike was made for.

The combination of wheel size, adjustable Showa suspension and good ground clearance makes even inexperienced riders feel confident. Two 310 mm discs with a four-piston Nissin calipers up front and a 256 mm disc on the rear wheel give ample stopping power.

Traction control with three settings and the option to deactivate ABS on the rear wheel make it easy for the fully fledged and less experienced to take on the great wide open. (To save costs and weight ABS is not fitted to the entry-level Twin.)

The new Twin is available with two gearbox options. Firstly, with a conventional motorcycle ’box and secondly with an automatic DCT (dual-clutch transmission), similar to the box that swops cogs in a DSG Golf. It’s not to be confused with a scooter’s continuously variable transmission (CVT) or pulley system. 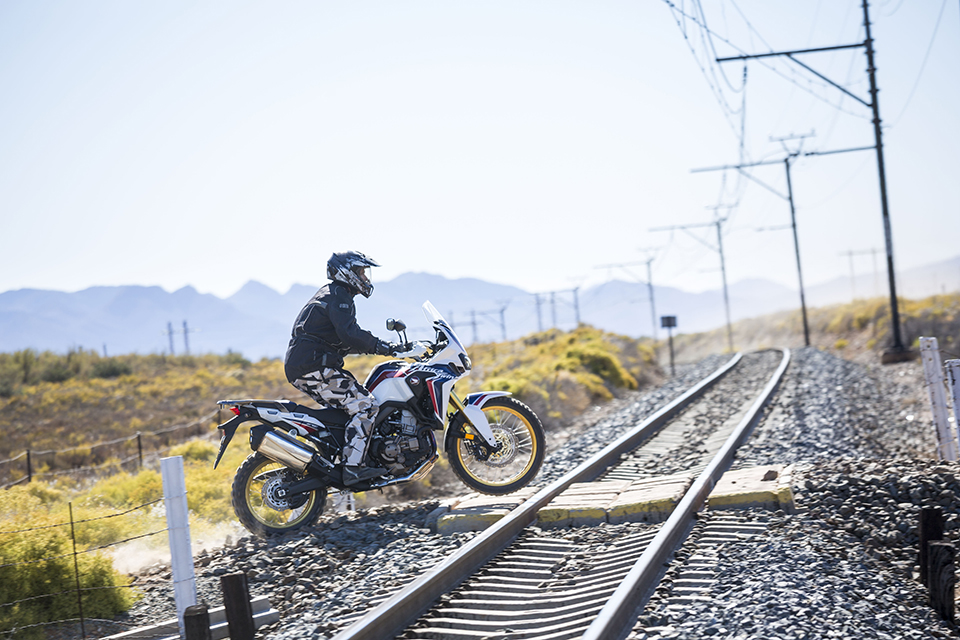 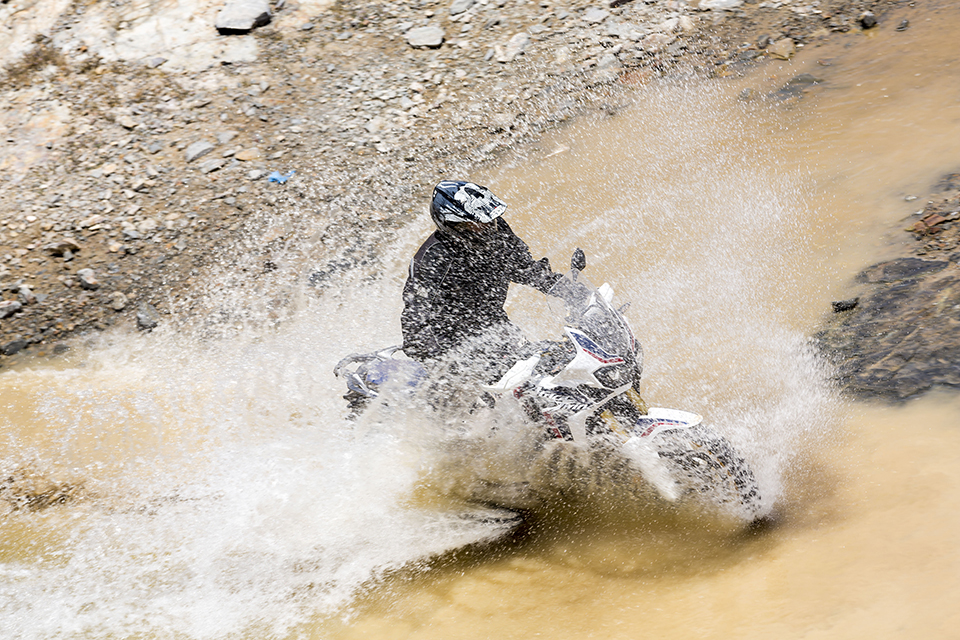 The DCT enables all riders to enjoy the Twin – not just on good roads, but also on challenging gravel paths. Therefore someone like me, with a road-bike background, can go where I would normally fear to tread. This is also thanks to excellent ground clearance and suspension that’s up for anything.

At the launch event the journalist received the DCT with a dose of prejudice, especially those who look like an Omo ad on TV after a day’s play in the mud and dirt. The perception was that the DCT wouldn’t be reactive enough in quickly varying, unpredictable conditions. The gentlemen from Honda Japan just smiled and said we should reserve judgement til after the gravel session.

The DCT-system’s performance was a big, pleasant surprise and definitely shifted opinion. When the button labelled “G” is pressed (that’s “G” for “gravel”) the system uses algorithms and all kinds of white magic to to select the “right” gear each time as the surface changes. This frees up the rider to apply his or her own processing power to the road, or lack thereof, and not think about clutch control or the most suitable gear ratio. The Twin even knows how steep the ascent or descent is when you’re taking on hills and inclines.

DCT or manual – you can’t lose

The unpredictable route Honda chose for the gravel session tested the Africa Twin in all conditions. Rocks, pebbles, water, sand and nasty dirt racks were the order of the day. Although I preferred the DCT version here, the conventional derivative also passed with flying red-and-white colours.

The DCT is the best choice for less experienced riders, but control freaks and traditionalists will opt for the manual box. Keep in mind that the rider of the DCT bike can ride it in manual. Pull a trigger with your left hand’s index finger and it goes up a gear. Push another button with your left hand’s thumb and you drop a gear. It works well and there’s no delay. A foot shifter for the DCT can be fitted to the bike as an option.

The manual transmission will trump the DCT in some extreme conditions, e.g. when the bike has to climb over fallen tree trunks or boulders. It takes clutch control to get the lift wheel off the ground and over obstacle. On tar the manual was my first choice, especially when weaving through the mountain passes. Yes, the DCT is clever and efficient, but each of us has our own riding style and the conventional transmission makes this possible.

Both versions showed an average consumption of just 5.2 ℓ/100km, which means the 18.8 ℓ tank will give a range of around 400 km. Yet the trip computer doesn’t show the distance to empty and the instruments are hard to read in direct sunlight.

The Honda CRF 1000 L Africa Twin is a well-balanced bike that will conquer extreme terrain – even when being piloted by a less experienced rider. After a full day on the road followed by a day of relentless off-road riding I can assert that the new Twin deserves to wear the mantle of the XRV 750 Africa Twin. It’s an excellent, exciting addition to the dual-purpose arena and it deserves a test ride before you choose your adventure bike. The Africa Twin will be for sale in South Africa from March 2016. 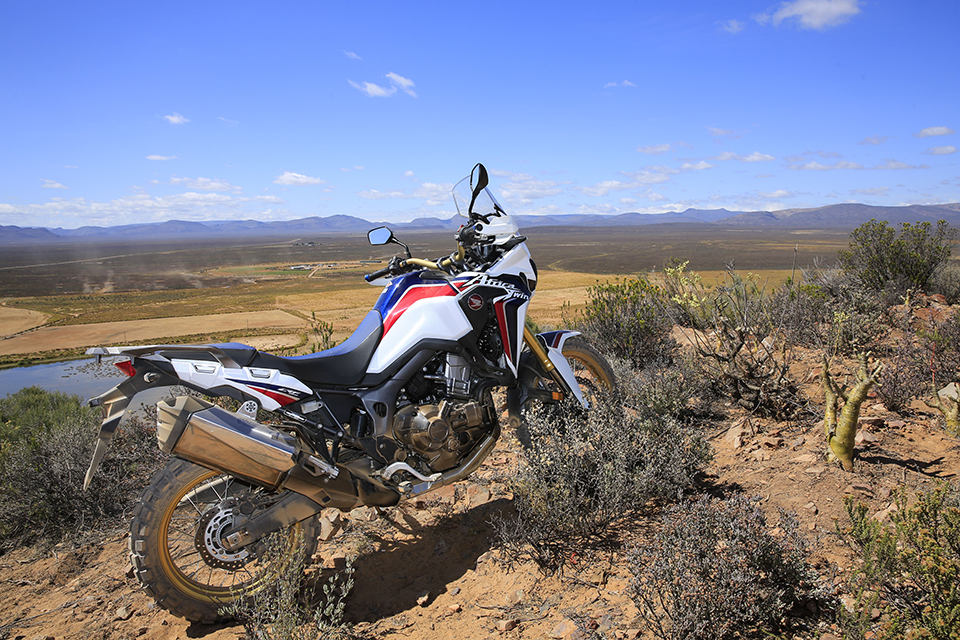 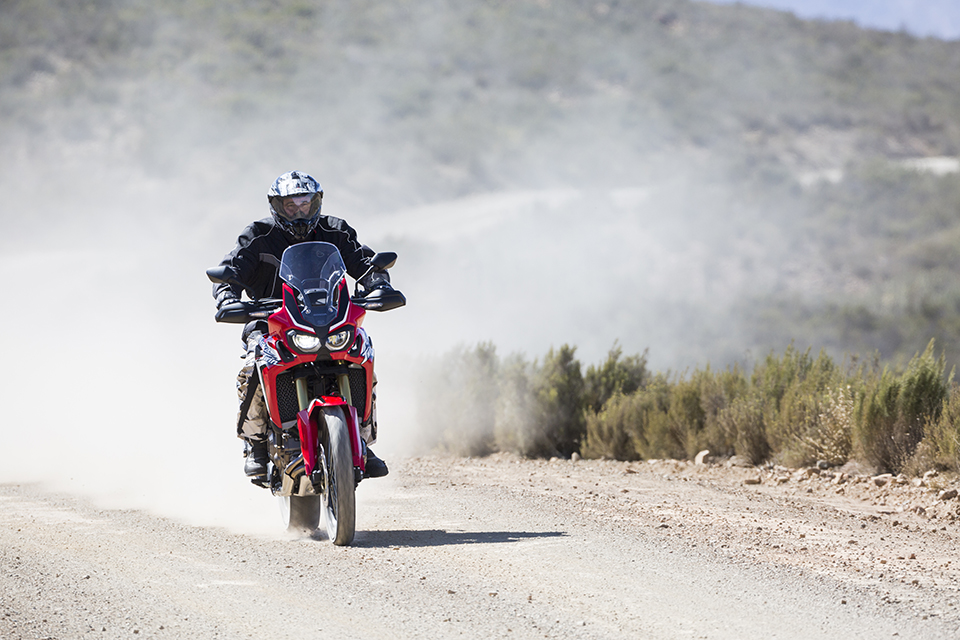 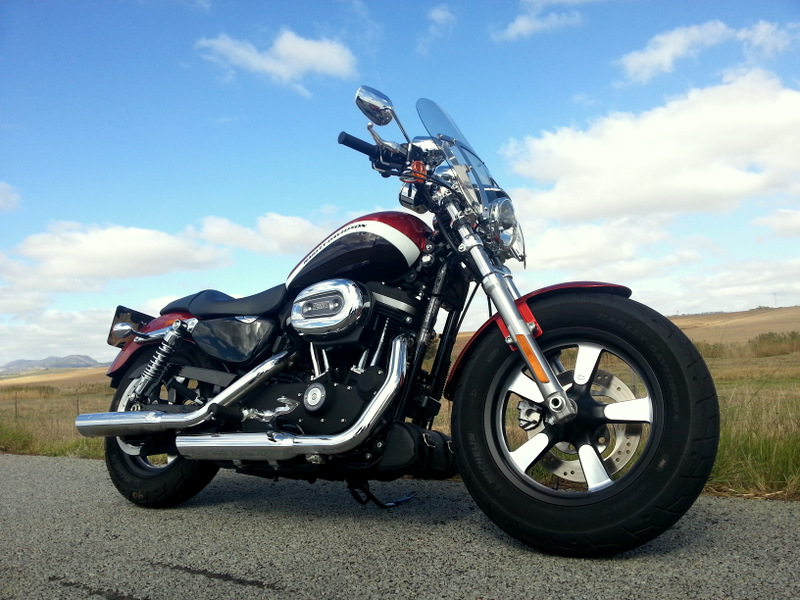 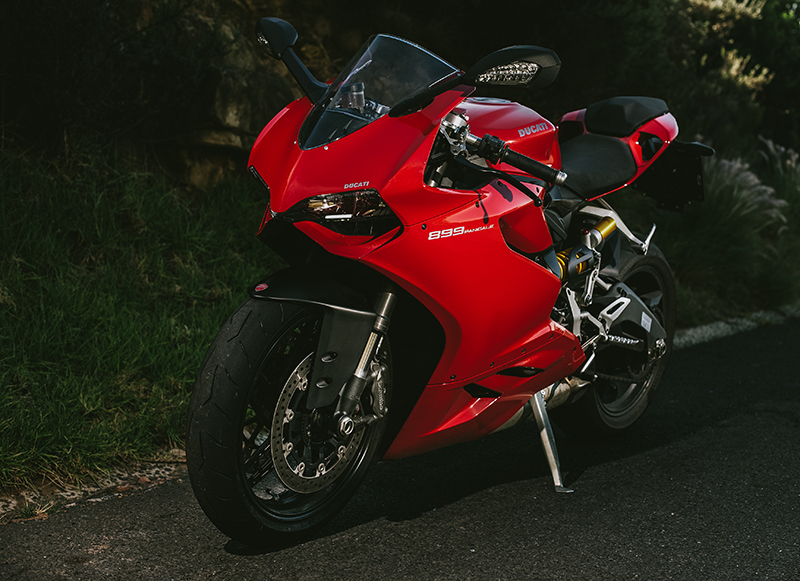